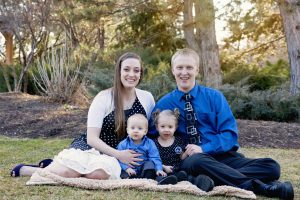 I had two perfect pregnancies and two perfect babies. We were ready for another. We got pregnant and were so excited! I was especially excited because I wasn’t SUPER exhausted and I wasn’t very nauseous. (I was very sick clear through 15 weeks with my first two). We finally hit the 12 weeks mark and told our families and had started spreading the word to our friends. Everyone was so excited for us.

Then, at 13 weeks I started bleeding. I panicked and was told by the doctor’s office that it was pretty normal and probably nothing to be to concerned about. 3 days later, I was still bleeding so my hubby and I went to the ER. We went through 2 different ultrasounds and sat in the ER for 4 hours to be told that our baby didn’t have a heartbeat and that I was in fact miscarrying. It appeared to only have developed to 6 weeks and my body just took 7 more to finally clear things out.

My husband was in medical school and I was in my last semester of my undergrad and we had our two kids ages 3 and 2. It was a very hard last half of the semester. I felt like the world fell down around me. This wasn’t supposed to happen to me! My mother never had any miscarriages! I shouldn’t either right?

It was really hard to tell everyone what was happening. It was especially hard to tell our 3 year old daughter that the baby in my tummy had died. What made it even harder was her telling everyone that we saw. Most of the people she told didn’t even know we were expecting yet but they knew we weren’t anymore!

This experience isn’t one that I would wish on anyone. It has been the hardest thing for me to overcome emotionally. Now it is 5 months later and I am one month away from my baby’s due date. I am still so terrified to try and get pregnant for fear of going through that all again.

I am trying to be more open about it with others but I am finding it hard because I always cry when I talk about it and I don’t like to bawl in front of people. I am hoping that sharing this here will help me to start the process of opening up more and aid my emotional healing.