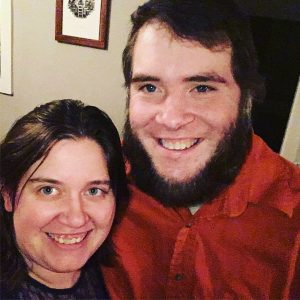 On June 6, 2017, Randy, my husband, and I found out were expecting our first baby. Three weeks later we found out there was no heartbeat and then 2 weeks later on July 14, 2017 the miscarriage happened. It was a huge crushing blow to us.

It took us a while before we decided to try again. I then had to go through a bunch of testing and ended up having to have surgery. On May 21, 2018 I had surgery to remove a polyp that was preventing us from getting pregnant again. Four weeks after the surgery we found out I was pregnant again. We went in for an ultrasound the following week and found we were having twins. This was exciting for us. They both had great heartbeats, so strong! We had a ton of hope that we would get to keep these babies. This was going to be different.

The next week we went back to find out if the twins would be identical or fraternal. Instead we found out they had died. July 10, 2018, 4 days before we were to have a memorial service for our first, we lost our twins. This was such a huge blow to us again. Within less than a year we had lost 3 babies in 2 miscarriages.

We had announced this pregnancy early because we needed the prayers. Everyone knew we had a miscarriage last year so we knew they would be supportive and there to help us. Announcing early came in handy for us when the next week we had to tell them the twins died. These two miscarriages back to back have left us of course completely empty. They left us wondering why? Randy and I constantly check in on each other to make sure we are ok. We both grieve differently but it has been nice to hear from each other how the deaths have affected us and are affecting us. I know we wouldn’t be able to get through this without the outpouring of love that was sent to us this time around.

Losing all three of our first kids has completely changed us. If anything it has made us more patient with each other. When we found out with our first baby there was no heartbeat, hearts began appearing everywhere in nature or in random things. I saw them all the time. Now that our babies have passed I still see them and I always smile and say hi to Kennedy, Charli, and Story. This helps us feel like our babies are near us. We have a wind chime hanging from our ceiling fan in our living room and every time the wind blows it or one of us brushes by it we think of our babies.

We will never get to hear their giggles, their cries, or know which of us they would be more like, but know they are nearby. To fight is to live right now, and although it’s hard I keep going because I know Kennedy, Charli, and Story need us to tell their stories. It is an honor to keep going in their memory, no matter how hard.