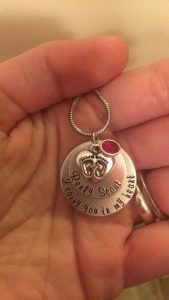 From the moment I met my husband, I pictured us as a family of four. He used to say that he wasn’t terribly interested in having children in the sense that he didn’t experience “baby fever.” He was nervous and uncertain when I became pregnant that first time, but having our son transformed him. He was softer, with lines around his eyes from constant laughter and smiling. He blossomed as a father and I couldn’t wait to see how he would grow as a father of two.

I was working on my bachelor’s degree, so we waited until my final semester was approaching. The days and weeks crept by until finally our “window” was near. I stopped taking my birth control and began to track ovulation. Months went by and finally, I got a positive pregnancy test. I took twenty-four more tests over the next few weeks, trying to convince myself that this was real life. Finally, around eight weeks, I decided I didn’t need to take pregnancy tests any more. This was real life.

My stomach, eager to embrace my favorite state of being, began to round out again. I looked further along than my friend who was weeks ahead of me. My clothes became tight and I became grumpy. I struggled to find clothing to fit me for an interview for my dream job. I ended up buying a new outfit, rescheduling my eight-week appointment with my midwife in favor of my interview, and heading in to nab the job, ginger candies in hand.

A week later, my two-year-old and I waited for the ultrasound tech to show pictures of our baby. Well, I waited. My son quietly colored pictures. The tech remained silent and mentioned that my bladder seemed full. “Why don’t you go leave your urine sample and come back? We will do a vaginal.”

I knew something was wrong. This was what I had feared despite my first pregnancy being picture perfect. I returned, undressed, and laid with open legs, waiting for the tech to return. She searched again before explaining that my little Renly had stopped growing at eight weeks, five days. There was no heartbeat, no blood flow through my uterus.

I felt the world crashing down around my ears as I sobbed the news into the phone to my husband, who made a hushed promise to leave work and drive the hour to the midwife’s office. I sat with my bewildered toddler, sobbing hysterically and then silently, tears streaming down my face, as the midwife discussed various options for passing my baby; she mentioned trying again. How dare she? How dare she indicate that I would want to try again? I shrugged her information off and went home to wait.

Nearly three weeks went by. Nineteen days of aches, cramps, tears, and the constant thought of carrying my little lost love around with me. The pain increased until, two days before Christmas, it became nearly unbearable. Again, my husband was working. I hobbled around, tending to the needs of our son. That evening, Renly entered the world, impossibly tiny with fingers and toes I wished more than anything could keep growing.

I took pictures. I sobbed. I hated everyone and everything. Then, I got back to work. The rest of the world wouldn’t stop even though my heart felt like it had. Four weeks have passed and I cannot stop thinking about how life “should” be right now. We have started considering when we will “see what happens” for another, but my heart twists every time we do because I fear this will happen again. I’m not sure I could survive it. Then again, I wasn’t sure I could survive this one.