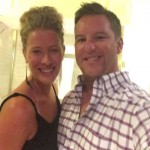 “I feel like you are going to do this ultrasound and there isn’t going to be anything in me. Haha.”

Those words haunt me. I said this right before my eight week ultrasound. The doctor just stared at me with a grave face and said “Why did you say that?” Sure enough there was nothing….talk about a badly timed joke.

My husband and I thought we were the luckiest people in the world. One month of trying, and boom we were pregnant. I always had this fear I wouldn’t have the easiest time having kids so this was a huge relief. Nothing could have prepared us for the hell we would experience.

The miscarriage lasted two weeks. After the initial ultrasound, there were four more ultrasounds to come. At one appointment, the doctor thought they saw some growth so we waited a week to see what would happen – a week in which I had a fetus inside of me, unsure if it was alive or dead. After that week, it was confirmed that it was not viable so a D & C was scheduled. Before the surgery, I started miscarrying naturally so I had to see evidence of the miscarriage before it could be removed. Hell.

After the surgery, there was a brief sense of relief. It’s out of me, it’s over, and now I can move on. Nothing could be further from the truth.

While my friends and family were great at comforting us, a miscarriage is a different sort of loss. When you have a death in the family, you are allowed to grieve openly. You can tell people at work, you can tell Facebook, you are allowed to cry. When you have a miscarriage, there is a lot of silence. During the process of the miscarriage and months to follow, I had to pretend like nothing had happened. I still had to meet my sales quota, interact with customers, laugh at friends’ stories. I was, and still am, a professional at doing my makeup so that my puffy eyes from hours of crying are hidden.

As the months have worn on, the miscarriage has brought on such new feelings and emotions. Since we got pregnant so easily the first time, my husband and I both figured it would happen quickly again. I thought “get pregnant again and this will all be behind you.” Four cycles later and nothing….each period a reminder that I failed and a renewed sense of fear.

I know they say that one in four women suffer from a miscarriage. Man I have a hard time believing that. I look at my friends and family – eight close women in my life had babies this year. Eight. Factor in the never-ending baby pictures on Facebook, and the world of the “one in four” woman gets pretty lonely.

They say time heals old wounds. This is very true, but each period tears those wounds right back open. People assume that I have to be fine at this point, and I play to this assumption. I say I am fine, smile, invite babies to our house, talk about breast milk, do and say the things that people want me to.