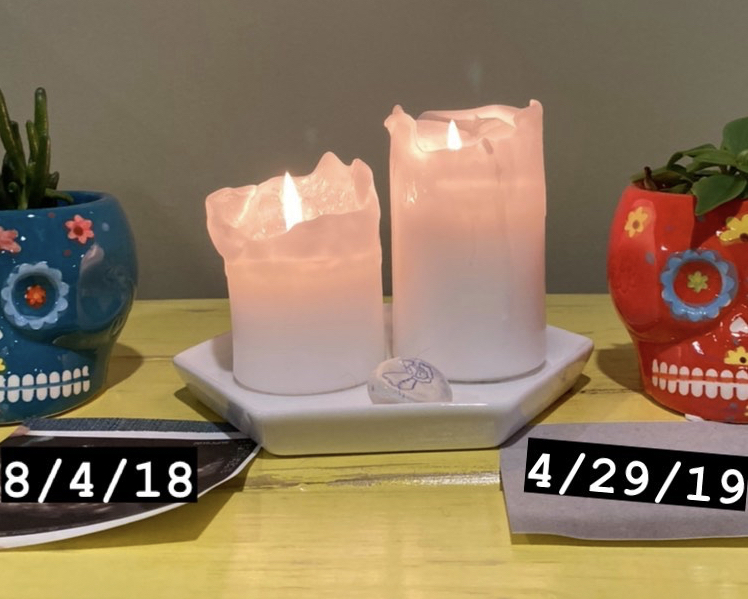 At this point in my life I can say with near certainty that whenever I meet someone new, one of three things will happen. 1. They make a remark about how young I look. 2. They have the audacity to call me Angie, after I introduce myself as Angela. 3. They tell me I look just like their distant relative/neighbor/friend and then show me a picture of another young, often petite, blonde, white girl. The latter leading me to conclude that I am not only ordinary looking, but that I, as a person, am ordinary. That I am common and average and regular. So it did not surprise me when I realized that when I share the stories of my miscarriages I find myself bookending them with phrases like “I was *only* 9 weeks along” or “so at least that’s *all* that happened.” I know that sounds like a leap, but it’s not.

It may sound cliché, but it bears repeating that everyone’s pregnancy loss is different and no pregnancy loss is more or less real. No matter how soon after your positive test, no matter how few symptoms or how little physical pain you experienced, and no matter how it compares to other people’s experiences, it is significant. And in case you, like me, think too little of your pain, consider these words from the wizarding world’s favorite headmaster.

In a purgatory-like meeting place, Dumbledore welcomes Harry after he was on the receiving end of a killing curse:
[Harry] “Is this real? Or has this been happening inside my head?”
[Dumbledore] “Of course it is happening inside your head, Harry, but why on earth should that mean that it is not real?”

Your loss is real, and no matter how common it feels some days, it is never ordinary or normal or unworthy of remembering.

I’ve been intrigued by Dia de los Muertos since I saw a single aisle endcap of decorations for it next to three aisles of Halloween decorations at Michaels years ago. As someone who went to their first funeral at 27 years old and has yet to lose someone close to me, I was curious about an entire holiday devoted to death. Maybe, less curious and more uneasy. As far as I could tell, or Google, nothing actually happened that day. No parade, gift giving, begging for candy or egg hunts. Just candles and a shared meal. Then there was the similar but less colorful version, All Souls’ Day, that I had also not heard of until young adulthood.

The culture I grew up in was nearly devoid of ceremony. Regularity and predictability, sure, but meaningful ritual not so much. Looking back I realized all the holidays I celebrated centered around Jesus or candy. Wait, that’s not fair to the 4th of July or New Year’s Eve. Those are all about fireworks.

It had never occurred to me that the human experience was much more than flaws to fix and pain to conquer. Looking back, it’s no wonder I couldn’t comprehend a day reserved for grieving and celebrating – for feeling and acknowledging.

It wasn’t until my miscarriages that I started to understand how much power lies in holding space and time to simply observe. A power I could feel only in opposition to my insistence to avoid and forget.

This past August marked the second anniversary of my first pregnancy loss. As it approached I felt a new longing to do something. I had no idea what, but the closer August 4th came the more I felt compelled to be prepared for it. Sadly, it came and went with a short, but slow, exchange of mutual heartache between my husband and I. Something like, “Oh, hey today is August 4th.”
“Oh? Oh… right. Yeah. It is.”
“Yep.”

For the next few weeks I thought about that often. Was I supposed to grieve better? Should I be more sad? Am I not supposed to talk about it?
I shouted at my own gut instinct, “What did you even want me to do?!”
“Something!” it said.
I felt so, incredibly, weak.

I was on the verge of tears for days after my internal voice reprimanded me so. Then, one Saturday morning, my husband and I were walking through Trader Joe’s (of all places). They had small Dia de los Muertos themed planters. Bright, colorful, decorated skulls holding succulents. We both stopped. Him, for the skulls, and me because there it was again – Dia de los Muertos. Evidently mainstream enough, or unfortunately appropriated enough, to be represented in a grocery store. An immediate pang of sadness hit me, but also a mysterious sense of understanding. We picked out two and I spent days researching All Souls’ Day and Dia de los Muertos.

I wasn’t brave enough to make a plan to observe the holiday, for fear that someone would accuse me of either appropriation or making an unwarranted big deal of my loss, so I let my longing and curiosity fade away. The morning after a late night celebrating Halloween with a bonfire, candy, and Harry Potter, I sat in the still morning darkness clutching my coffee. I savored the slow waking in silence, staring blankly at our new succulents on either side of our TV and realized… it was today. Day of the Dead.

After one last deep dive into the history of the holiday, I decided I was doing it. I didn’t have the right candles or the tablecloths to make a beautiful alter. But I decided some five-year-old, dusty candles in storage and the console table we never use would work. I never got a copy of the ultrasound from my second pregnancy, but I had the picture of the positive pregnancy test I sent to my husband. “Good enough,” I thought. I laid it next to the ultrasound of our first loss, lit a candle for each, and arranged our Trader Joe’s planters on either side.

So there they were. Our babies. The ones without a birthday or name. Whom we loved and I bore, but never met. Who barely made it into this world, yet definitively left it.

I let the candles burn all day. I packed some moving boxes, washed dishes, and embroidered a little. Each time I walked by my last-minute, yellow alter I smiled or cried. But most importantly, I remembered.