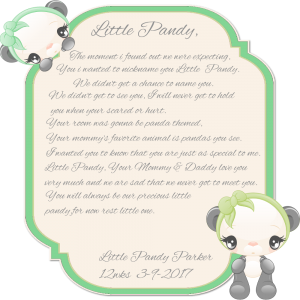 My fiancé & I had talked about having a baby together for months, we tried for 8months with no luck. His family always joked about him never having kids so we thought they knew something we didn’t. We slowly began to lose hope of having a baby.

January 25, 2017 I decided to take a pregnancy test just to see. I ran to our room and jumped onto the bed with fiancé and told him there was something I had to tell him & that as much as I wanted to make a special moment for it I couldn’t wait. I leaned in close to his ear & whispered “you’re going to be a daddy!” His eyes got brighter and smiled at me. It didn’t take long before we had picked out the prefect nickname “Little Pandy.”

I didn’t get morning sickness at all which worried me a little bit but had read that some women go through their whole pregnancy without it. We slowly started telling our friends & family at the end of February. March 17 was the day we decided wanted to tell our parents & grandparents. Since the baby would be 13 weeks & fiancé’s parents were going to be down for weekend visit.

8 days before, March 9, I had gotten off the phone with my two older kids’ father after a fight. I went to the bathroom & realized I was spotting. I texted my fiancé saying I didn’t know if it was anything to worry about but I had started spotting.He came home after work, we had dinner. After dinner I went to bathroom, the blood was now a bright red. I ran into the room crying, fiancé followed me asking what was wrong. I explained the the blood was red & that it was time to tell his grandmother who we live with to get her opinion on what to do. She immediately told me to get dressed, we were going to the hospital – being that she had lost two babies herself she was just as scared as I was.

The hospital ran their test, never doing an ultrasound. They told us they weren’t worried that we were miscarrying and to keep our 1st ob/gyn appointment on Monday.

Sunday at 2am, I woke my fiancé to a blood-filled toilet and he asked what I wanted to do. I told him the hospital wouldn’t do anything so we went back to bed. Monday at 4am, I woke to terrible pain on the right side of my abdomen & blood clots in toilet. I cried myself back to sleep knowing something wasn’t right. We get to our Monday doctor appointment and they do an ultrasound. At this point in the pregnancy we are supposed to be at 12 weeks  & 3 days. The ultrasound shows a yolk sack measuring at 5 weeks. They tell us to come back Friday the 17th. The rest of the week I stay in bed sleeping, crying, only getting out of bed to go to the bathroom & get a drink. Friday comes, the doctor walks in and says I think you already knew this by the way you were acting at the last visit but you did miscarry. She said the way my hcg level dropped so fast that she didn’t think I would need a d&c.

The whole way home I cried not knowing what I had done wrong this time. I have had two children from a previous relationship. Those two weren’t planned at all, the oldest that is now 10 years was going to be adopted but we changed our minds. The second one now going to be 7 years, the father wanted me to do an abortion, I wanted to keep it. Why did the two children that weren’t planned able to make it but not the baby that was already planned, loved & wanted? I am having a very hard time with losing my baby. I have even shut my fiancé out trying to push him away.