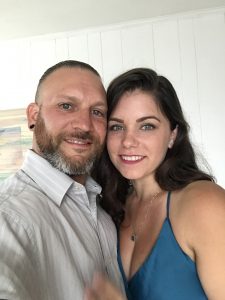 This was my second pregnancy. We weren’t trying, but we weren’t NOT trying either, so we went with it. I had some complications in my first pregnancy but I delivered a healthy baby boy in the end, so I wasn’t too concerned this time around when i showed the same symptoms.

I had a positive pregnancy result right around 4 weeks. I scheduled my regular appointment for about 10 weeks gestation. At 5.5 weeks, the cramping and spotting started, but it was the same with my first pregnancy so I hoped it would be nothing. In emailing my ObG, the nurses kept assuring me everything would be okay, but sent me for bloodwork anyway to test my hCG hormone. It was increasing but not doubling as fast as it should. At would should have been 7 weeks my ObG told me to come in for an ultrasound to measure the baby.

My baby measured at 6 weeks and 3 days, not too far behind and we thought that maybe I miscalculated my last menstrual. My baby had a heart beat, and that’s all that mattered to me. I was told to come back in 2 weeks to measure again.

I came back when I was 8.5 weeks, they did the ultrasound and I knew something had gone terribly wrong. I saw my ObG try again and again and again, she tried 7 times total but there was no heartbeat, and my baby only measured 6 weeks and 5 days. My baby had died 2 days after my last appointment. We named her Sweet Pea, because that’s the size she grew to.

I knew something was wrong from the beginning with this pregnancy, but I was sooo hoping it just paranoia and my hormones playing tricks on me. It’s been 4 weeks since that appointment and I still feel like I failed as a woman. We were built to bear children, yet I couldn’t even do that correctly.

I had the D &C done since my body wouldn’t expel the fetus. Even after the procedure, I was given the pills as well, and I bled for 2 weeks. I still question if I could have done something wrong, done something different in the beginning. Was I not excited enough? Was it my work habits? My meds? An act of God trying to teach me a lesson? An act of kindness of His part to spare me and the baby from something even worse? I question everything. And I have no one to blame, I can’t point a finger and say “it’s your fault!”

I’ve been told that it’s my own body attacking my babies. My first baby survived, but my second didn’t. Now every time I look at my son, I see him even more as my miracle baby. In the back of my mind has always been the fear that I couldn’t bear children; I was an anemic athletic kid growing up so this was always a possibility, I hoped that it never did. Now that it has, I’m lost… I love children more than anything, my husband and I want more kids, what am I suppose to do if I can’t have more? My ObG wants to give me progestin when I start trying again, just in the hopes of stopping my own body from attacking my next baby.

And I know it doesn’t make sense, but I wish God had just taken me instead. My innocent didn’t deserve to to be taken away.