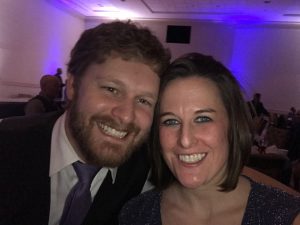 My husband Zach and I had been married a year when we started talking seriously about having a baby. We decided we wouldn’t take measures to avoid it and we would see what happens. About three months in, I got pregnant! It was unreal when I took the pregnancy test. I told Zach and we cried and laughed together thinking about our adventure to come.

The weeks continued and my pregnancy symptoms began, nausea being the prominent one. Each night before we went to sleep, Zach would talk to my belly and whisper how much he loved them. We talked about names and what they would look like. It was so fun to dream together of the day he or she would be born.   At nine weeks, I went for my first doctor’s visit. Zach sat behind me as I lay on the table anxiously waiting to see our baby on the screen. The first thing I noticed was the doctor’s face. As she moved the ultrasound wand around, her face looked pensive. After a few moments of silence, she spoke. “I’m sorry, this is not a normal pregnancy,” she said.

She turned the screen towards us. It was blank. There was a nine week womb with nothing in it. Complete darkness. My heart instantly dropped. I couldn’t see Zach, but I could feel his sadness. How could this be? We were young, we were healthy. We were good people. Why, why, why? I got dressed and we met the doctor in her office. She explained that what I had experienced was a blighted ovum. The embryo stopped growing at some point but my body continued on as if it were pregnant.

I was fooled by own body. She told me I could wait until I miscarried naturally, which could take a few weeks or up to a month or I could have a procedure done. I opted for the procedure.

The following day I had a D&C. After the procedure, I remember waking up and feeling fine. That nauseous feeling I had become accustomed to the last few weeks was gone. It was awful. I never thought I would miss feeling sick to my stomach. We stayed at my parents’ house that weekend. Each night I cried myself to sleep in Zach’s arms.

As the months went on, I tried to understand why this happened, why my body would fool me this way. We spent a lot of time discussing our feelings. On the positive side, this event brought us closer as a couple and helped us learn to better communicate our feelings.

Around April, we decided to start trying again. By August, I got another positive pregnancy test! We tried not to let the first experience overshadow our excitement. By Monday, I was feeling different. After work, I came home and I could not help but cry. When Zach arrived home, I told him I couldn’t shake this feeling of fear and sadness.

The next morning I began spotting. As the day progressed, the bleeding got heavier. I went to the doctor that afternoon and she told me there was a chance it could turn out to be a normal pregnancy, but it was most likely a chemical pregnancy. She took some blood and told me to come in two days to get more blood taken. The following day I continued to bleed, passing big clots. The physical pain was a lot, but I could handle it. The emotional pain wreaked havoc on me.

The doctor called me a few days later to confirm my hCG levels had dropped. She told me that even though I had two miscarriages, I would probably be okay. It’s been five months since that second miscarriage. We are trying again and while I still have my bad days, I am feeling better every day. All we can do is hold on to the hope that some day we will get our little one.