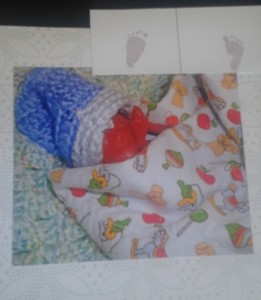 I just had a miscarriage on the 3rd of September 2015. This is my second one. The first was at 11 weeks with not many symptoms, I had some pain and went to the doctor’s office to see my midwife and while on the check up my baby just came out of my womb. I was sent back home and a couple hours later I was taken to the ER and had a D&C.

It took me 3 years to be ready emotionally to get pregnant again. I knew right away when I was pregnant so I went to have my pregnancy test. Positive. I was 5  weeks and so excited. I gave the big news to my husband and my 5 year old son 1 week before Father’s Day, I was planing to wait until Father’s Day but could not do it. The same day I had to go to the ER because I was having abdominal pain, thankfully the baby was ok they said it was a UTI. I was sent home 12 hours later, no restrictions or anything else.

So I started my prenatal care, through the pregnancy I had lots of stress for family issues and I had lots of symptoms like a UTI but results always came back negative. I would ask the midwife but I really did not get any help. I would tell her I have lower back pain and lots of discharge and she would said it was ok it happens. I did get to hear my baby’s heart beat twice.  The last one was on September 1, my last appointment. I did feel a little weird and I told her the discharge was a lot. She said it was sometimes normal but it was excessive so she sent samples to the lab and send me home.

On September 3 I was sleeping and felt the urge to go pee, when I  got up my water broke. I was so scared and we called 911. My husband had to take our son to a friend’s home to sleepover while I was taken to ER. I was hoping for the best. I got admitted to the ER and waited there for about 20 minutes until the nurse came. I asked to listen to my baby’s heart and it was still beating , but when the doctor came and did the ultrasound, my womb had no liquid. It was horrible to hear the doctor say he was not going to make it because he was only 17 weeks and there was nothing they could do. His organs were not ready yet and they needed to induce labor and it was possible he might be born alive and we would wait for him to die.

It was a long process, I got to the hospital at around 12am, and after the medication the baby was born about 3pm. I was able to see my baby, he was dead when he was born. The hospital offered for photos of my baby to be taken, in the beginning I didn’t want them to, but then I changed my mind and I am glad I did because I have some memory of him. I had to have a D&C at about 7pm because the placenta was not able to come out completely. Finally I was released about 11pm the same day. It was a terrible day, I had to give the bad news to my son three days after my loss because he was asking about the baby and I could not hide it anymore.

It has been 3 weeks and I just can’t stop crying, I feel awful. I thank God my husband and our son are with me, they have been a great support even when I know they are in pain as well. My son wipes my tears and my husband hugs me when cries with me. I’m grateful that God gave me the privilege  to be a mother for those 17 weeks, I was so happy.  I am faithful I will be better because my kid needs me, and I won’t forget my little angel but that does not mean I am not suffering.