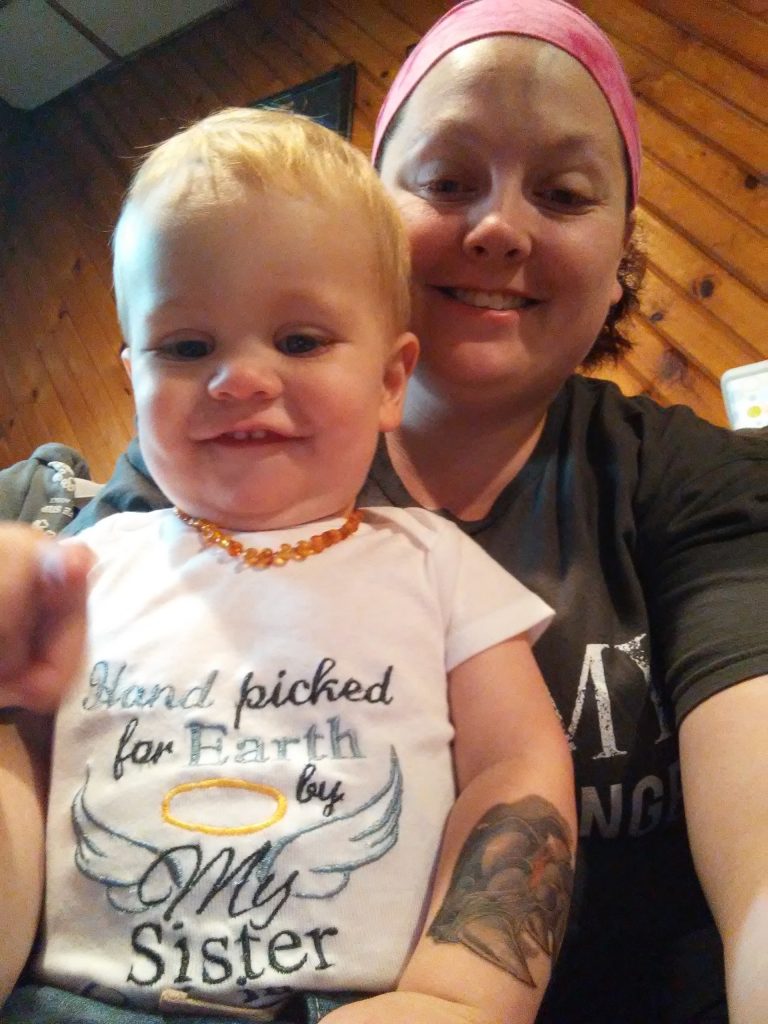 We had our first baby “out of wedlock” in October of 2012. I definitely wanted more babies but Paul was unsure. In January of 2015 we started planning our wedding and he finally caved on a second baby IF we waited until after we were married.

We were married on October 17, 2015 and just over a month after the wedding, I was pregnant again. I took a test four days before Christmas at the insistence of my cousin because I was not feeling the greatest and sure enough it was positive. I immediately sent Paul a picture of the test saying “guess what.” We told our parents by printing out pictures of the test and framing them saying “Coming August 2016.” Our little boy swore that he was getting a baby sister and talked on and on about his Sissy.

This pregnancy though was a total 180 from my first. I never felt quite as confident and comfortable as I had the first time. I was violently ill every day, suffered from two kidney stones, my blood pressure was high, and I was spotting all the time. The doctors kept telling me that everything was fine, all of the symptoms I was experiencing could be related to my kidney problems. On February 10, 2016 I went in for what should have been my routine 12 week check. The doctor sent me upstairs to have an ultrasound because they weren’t able to find the heartbeat with the doppler. I knew something was wrong. During the ultrasound the tech never turned the screen towards me to let me see anything. All she said was “I have to talk to the doctor.” When she left my mom told me that there was a baby, but she couldn’t see a heartbeat.

I don’t know if there are even words to describe how I felt. Ashamed, guilty, broken, lost, desperate. None seem good enough. I called my husband at work right away and he took the next few days off so that he could be at home with our son while my parents took me to have a D&C done. We wanted to keep his life as uninterrupted as possible. I’m in the hospital signing papers and would just break down sobbing, while the nurse, a complete stranger, held me and told me how sorry she was. I welcomed every cramp because that was a sign that my baby had been real. I isolated myself for weeks, seeing only my husband and son, not talking to anyone. I wanted her so badly and I couldn’t stand the fact that I couldn’t protect her.

I did get pregnant again shortly after, unintentionally. I struggled my whole pregnancy between excitement, grief, guilt, and anxiety. I felt like I was betraying my daughter, replacing her with another child. I worried that every cramp was a sign that I was losing the life inside of me. I lasted 9 months and gave birth to a healthy BIG boy. He has not replaced her. She is a part of our lives because we talk about her, we celebrate what would have been her birthday, she has ornaments on our Christmas tree just like her brothers.

Before this experience I thought people just moved on from it. But how do you move on without a piece of you? I do it by making sure that she will ALWAYS be remembered. I do it by making it known that I am 1 in 4 and I am blessed to have a guardian angel who grew inside me even for such a short time. She was a part of our family and she matters.