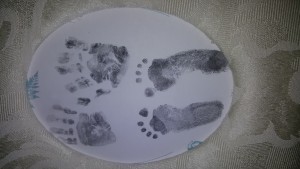 I’m a type one diabetic, I’ve been one all my life. On August 28, 2015 I took a home pregnancy test and to my surprise it was positive. We weren’t trying and I was on the pill. I called my doctor right away and they confirm I was pregnant. I was nervous but happy at the same time. I already have a four year old son and my pregnancy wasn’t easy with him either.

I took all the right steps and never missed an appointment. At 7 weeks I had a small bleed but the baby was fine. I had horrible morning sickness which didn’t do well with my diabetes so I was in and out the hospital. I found out I was having a girl. I was thrilled because I decided to tie my tubes. On January 4 I became very ill and was hospitalized. My kidneys started to shut down so on January 6, 2016 I gave birth to a beautiful 1 lb 5 oz, 11 inch baby girl Amaya Kendall.

She was doing well then her white blood cell count dropped low as she was fighting an infection. She was just too small to fight it and blood got in her lungs. I held her on my chest as she took her last breaths she rested her head and went to sleep. It hurts every day and I feel I failed her because I couldn’t save her. A piece of my heart now lives in heaven.