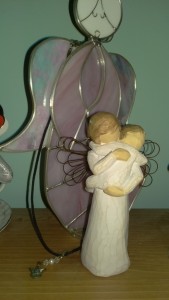 My husband and I were engaged in November 2013 in Hawaii. I have two kids from a previous marriage, but this was hubby’s first baby. I found out I was pregnant in February 2014 at an appointment at Urgent Care because of a urine test. I was pretty early at that point and even though we weren’t planning it and were trying to wait until after the wedding, we told our parents almost right away.

I made an appointment and had my first ultrasound. The heartbeat was around 90-100 bpm. The doctor told me that it was a threat of miscarriage possibly. I didn’t want to believe it. I thought maybe it was just too early for the heartbeat to be faster. I was so scared. We went for another ultrasound and the heartbeat was in the 60s. That didn’t feel much better. The doctor scheduled another and at around 8 weeks, I went in to find out our baby’s heart has stopped. My heart broke into a billion pieces. I fell apart on the stretcher after the news.

As if that wasn’t bad enough, I had to have two D&C’s because they failed to remove the fetus the first time, on April 8, 2014.

2 1/2 weeks after surgery #1, I was in horrible pain and had a fever. I had to go in and get antibiotics at the doctor’s office and then go into the hospital for a 3-day stay with 3 other types of antibiotics. (I was almost septic and could have died) They took the baby out on April 25, 2014. I never knew this pain could be so intense. The emotional turmoil after it happened was so bad, I sometimes threw up from crying so much.

A month after my last D&C, I found out a was pregnant with our rainbow baby. We were shocked, scared and happy all at once. I bled through almost my whole pregnancy, but she’s a normal, healthy 16 month old now. I am also pregnant again with our next baby. It’s a boy this time. I’m 29 weeks. The nervous, scared feeling never goes away. I’m so grateful for my kids, but I never stop thinking about our little angel baby.