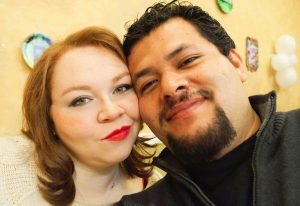 We lost Baby Rubio by miscarriage.

That sentence wasn’t so hard to say (or type).

Yesterday, as I waited for our sonogram results at the ER and thought about the new “stigma” I belonged to, I tried to recall all the names of families who had experienced baby loss. But I could only remember a few precious, strong, surviving women who had to endure such a fate. Who had shared their struggle openly and publicly.

I had begun to feel foolish about the grief that had washed over me. After all, he was only 9 weeks. (We like to think he was a him.) But I felt this crazy, sort of psychedelic feeling that the world had sort of gone wonky. And then just sadness. So sad.

I didn’t want to reach out to these women because I felt like it might diminish the seriousness of their loss. Loss that I couldn’t even begin to understand. And still don’t. I do not think their pain is more than mine, but I know that the ache is very different. Neither diminished in its sadness.

So I looked online. Sort of looking at information on miscarriage in general. These amazing stories of mommies who lose their babies at 5 weeks, 8 weeks, 7 MONTHS began to pop up. Statistics and medical journals detailing more medical viewpoints of miscarriages. It was easy to find information. To be honest, there was a lot out there. Most of it very sympathetic and heartwarming. But in EVERY SINGLE ONE, was this line:

“1 in 4 pregnancies end in miscarriage, but no one talks about it.”

WHAT? Here was this vast community of mommies and daddies who have gone through miscarriage! With every possible scenario, from people from every walk of life. But no one was talking about it?

Well, I am sad. I am sad at the loss for what could have been. The moment we knew he existed, HE EXISTED. Every thought as a pregnant mother had that little guy tugging in the background. I shared my blood with him. I nourished him with my body, and hurt, and threw up, and peed a whole lot for him. I mourn the baby, the teenager, and the married father he was on track to be. That was all real. And by the looks of it, I am not the only one who feels this way. We all began that way- in a woman’s womb.

Women who have lost 4 babies? I hug you so tight right now.

For every mother who has lost their baby, teenager, or young adult, I hug you so tight right now.

I lost my baby yesterday. I am still losing him. It isn’t a fast process, this miscarriage. Those mommies who had to endure torturous days of medical intervention or difficult recoveries, I was never sincere enough to you when I offered my condolences. I still can’t fathom the pain. You are the phrase “God is so good.” Because you are still alive and you find times to smile. MIRACLE.

“1 in 4 pregnancies end in miscarriage, but no one talks about it.”

There are a whole lot of women out there who aren’t ok. I know we WILL be ok. But that is not right now.