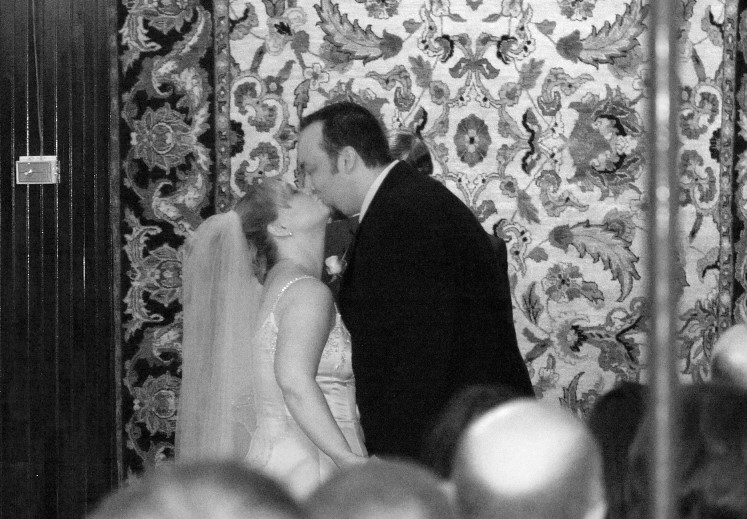 We tried for two and a half years to get pregnant on our own. We had intended to see a fertility doctor after a year, but unfortunately we had numerous life issues that got in the way of that. The only thing we had done was some preliminary blood work and a semen analysis. In June 2012 my mom passed away after a quick battle with cancer. A few weeks later I was lying in bed wondering what to do about the fact that we still weren’t pregnant. We had put off seeing a fertility doctor all this time and I realized that if we continued to let life get in the way or make excuses, we would never have a child. So my first plan was to see if I got my period the following week and then contact the clinic my OB/GYN had recommended. Then something inside me just snapped and I knew that my period was coming and I shouldn’t waste any more time. So the next day I made the call and got us an appointment.

The doctor was really nice and explained that we both had some minor issues that made it difficult for us to get pregnant on our own. He recommended trying IUI first. Because I had just started my period a few days ago he said we could start right away, assuming a quick ultrasound didn’t reveal any other issues. So we left the office with a Clomid prescription and were supposed to come back in a couple of weeks when I got a positive OPK test. But first, we decided to finally come clean with our families about the trouble we were having. I’m pretty sure our families had decided we didn’t want any children but were afraid to ask because my husband and I are both such private people. So we each made the call and came clean to our parents. It was incredibly difficult but everyone was very supportive.

Two weeks later I got a positive OPK test and contacted the clinic. We went in later that day and they did an ultrasound to see how everything looked and performed the IUI immediately after. It’s crazy how fast everything moves in a fertility clinic. Somehow I was able to wait the two weeks to take a pregnancy test, probably so I didn’t have to face the disappointment of a negative test. The success rate for IUI is not very high and it seems like there are so few stories about it working, let alone on the first try. So when my digital test came up “Pregnant” that morning, I just couldn’t believe it. I immediately ran to my husband to show him and we were ecstatic. I contacted the clinic and had a blood test scheduled on Monday to confirm the pregnancy. We didn’t tell anyone that weekend and just enjoyed the fact that we were finally pregnant.

Monday the pregnancy was confirmed. We had another blood test two days later to make sure my numbers were doubling, which they did perfectly. This was actually happening and we couldn’t believe it. An ultrasound was scheduled for when we should be seven weeks along.

Two weeks later though, I had some spotting when I was at work. I did my best not to panic. But when I had more spotting the next day, I called the doctor’s office to see what I should do. The nurse was so sweet. I told her about the spotting and mentioned that I had an ultrasound scheduled for the next week so I wasn’t sure if I should wait until then. She said they would definitely not make me wait that long and so I went in later that afternoon. My doctor was not available, but another doctor came in when they did the ultrasound. I should have been about six and a half weeks, but I was measuring about a week behind. With the vaginal ultrasounds, you can often hear the heartbeat at about six weeks but they couldn’t get anything. So while things didn’t look good, we weren’t 100% sure at that point what was happening. So they ran another blood test to see what my numbers were and said they would call me the following day.

The next day, the nurse called me and told me that my numbers were much lower than they should be and confirmed that I was miscarrying. I was devastated. I left work immediately and on the way home, the real bleeding started. Telling my dad was really hard. He had just lost his wife two months ago and now he was losing a grandchild. I was so sure that this pregnancy was meant to be that it was hard to accept that it was ending. But I was determined to try again. I also knew that I would never again feel that pure joy that women who haven’t suffered a loss feel. That feeling of excitement and belief that nothing can go wrong.

A few months later, we did another round of IUI and once again I got pregnant. The first blood draw revealed positive numbers, but when they did another draw two days later the numbers had gone up but did not double. It wasn’t enough to be concerned about just yet, but after my last experience I had a hard time being optimistic. Another blood test two days later revealed that my numbers had dropped and the nurse told me “it didn’t look like it was a viable pregnancy” and that I would probably start bleeding in the next few days. I couldn’t believe this was happening again; it just seemed so unfair. I spent most of that weekend googling what type of tests they can run to explain multiple miscarriages and prepared myself that these tests might not be covered by insurance.

The next Monday, they did another blood draw to make sure my numbers we continuing to drop but when the nurse called me, she told me my numbers had actually gone back up. The doctor called me a little while later and said they wanted to continue to monitor me. He was concerned that it could be ectopic but he also wondered if maybe I was pregnant with two and had lost one. My head started spinning with the possibility of still being pregnant but I was afraid to get my hopes up. More blood tests revealed that my numbers were continuing to double as they should for a pregnant woman and two weeks later an ultrasound revealed a growing baby with a beating heart. It was such a strange feeling to be sad about losing another baby but relief that I was still pregnant. As my doctor explained it, this type of thing actually happens all the time but most women aren’t being monitored early on and have no idea that it has happened. About 8 months later, I gave birth to our son.

I still can’t believe how our story happened. I’ve passed that first due date three times now; the first time when I was pregnant with my son. It was such a bittersweet moment then and now. If we had given birth to that child, I wouldn’t have my son which brings up so many emotions. I also think about my son’s twin and what would have happened if we hadn’t lost that one. My husband doesn’t really like to talk about our losses, which I imagine is pretty common. But I still think about our lost children on both due dates.