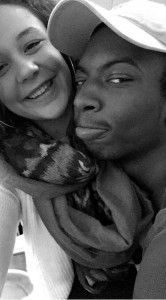 I was 17 and me and my partner had been talking about if I ever got pregnant. We had baby fever bad, we talked about the pros and the cons about everything. After months of trying we had given up and thought it just wasn’t our time and it was for the best. Two days later I was looking at positive pregnancy test with my best friend beside me. I don’t know who was happier me or her. When I told him I thought he was going to pass out!

I knew I was pregnant for about a week, I had so much planned out. So many people were there for me. Then I just had this one extremely bad day. I tried to just ignore everyone and not freak out because I knew stress wasn’t good for the baby. I had finally fallen asleep only to wake up to the worst day of my entire life. To something I would never wish upon my worst enemy. There was so much blood and I called my friend in the room and she just looked at me and told me not to freak out but she was taking me to the hospital. I tried calling my boyfriend and when he finally answered I told him what was going on and he couldn’t be there, he tried so hard to get there.

I was in the hospital for what felt like eternity. I knew something was wrong I was just hoping and praying that they could save my baby. I know that I only knew for a little over a week but in that short time I had grown so attached to my baby. The doctor finally told me that I was having a miscarriage and there was nothing anyone could do to save it. When he told me that I lost my mind and my heart broke a little. With my child still in me I had to go home suffering from so much pain knowing I’m losing my child.

The next day came and I had lost it around 9 p.m. I rushed to the hospital to be told what I already knew. I had also found out that I was 6 weeks and 6 days pregnant and my due date was September 11, 2016. For the next week I didn’t change clothes, I didn’t eat, I didn’t talk besides yell at everyone to tell them to leave me alone. I hated myself and everyone around me. I blamed everyone else at first and then I blamed myself for that stupid day. I should have just went home and went to sleep.

The month following I had pushed everyone away, even the man that I was supposed to be having a child with. We broke up. Stopped talking for what felt like years but was only a month or two. I turned to drinking and drugs to get over the pain of losing two of the most important people in my life. The drinking got bad, really bad to the point I would sit at a fast food place with a bunch of friends with vodka mixed into orange juice hoping nobody noticed. I would get stupid drunk at parties to the point I would call him crying about how I missed him.

Finally I thought about my child and realized this isn’t what I should be doing. Him and I worked things out and he’s been my biggest support in this. It’s now time that we would have had our baby now and I cried a lot. Its only been 8 months since I lost my child, but it still kills me, sometimes it just hits me and I start crying. Lately he’s been taking it harder and I sometimes feel like he isn’t there to support me anymore, to the point I can’t really talk to him anymore. Since the miscarriage (1-20-16) I have not been able to get pregnant and that has not helped with the pain either.. Will I ever get over the loss of my child?