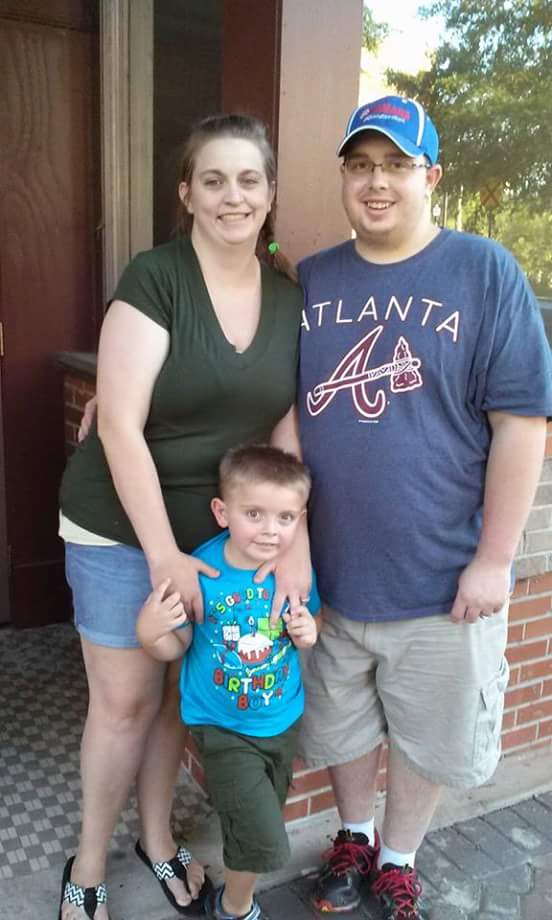 In May 2009 my husband Matthew and I got married, and we wanted kids but really didn’t have a plan on how long we would wait. In September 2009 we found out we were pregnant and due in May around our anniversary which was so exciting and scary. In October I had a ultrasound to hear the heartbeat and I was 8 weeks. Well unfortunately nothing was there but a empty sac. I was devastated. My husband had left a minute to go get our cat from the vet. This was hard and he was heartbroken too. We didn’t want to believe it but 2 days later we met my now doctor and she did a D&C.

Then in November 2009 we found out again we were pregnant and I was excited but scared. We found out at the ER but wasn’t sure if it was viable because my numbers may of been left from before. I followed up with my doctor and she said I was pregnant because my numbers had already went to 0 and were back up and the due date was August 10, 2010 – my birthday. The pregnancy went normally and was great – I was sick a lot but so worth it. On August 5, 2010 I was induced and had a long 12 hour labor. Because his heart rate was dropping I had a C-section and our baby boy was born at 5:02 pm . We were so overjoyed.

Fast forward to almost five years later. We waited this long because Hunter ( my son) had health problems and surgery (and now he is overall healthy other that mild asthma) and we were in and out of hospitals so having another baby would have been unfair to him at the time. But now he started asking for a baby. We started trying in March. In May 2015 I got pregnant but it was a chemical pregnancy. Then in June once again pregnant! My numbers were a 10 so I had to get them followed up but they tripled so I was ok. I had a ultrasound at 5 weeks 5 days and there was just a sac and it measured five weeks but she said not to worry and they rechecked my hcg. The next week I was getting ready to go to the beach and Wednesday night I noticed I was spotting so Thursday morning, July 2, I went to my doctor and the ultrasound show nothing still. I was bleeding at 6 weeks but they said not to worry yet because my dates could be wrong but the sac did not grow in a week. My doctor said she was not worried yet and the sac did split and it was possibly twins and my cervix looked good. I was cleared to go to the beach but not go too deep in the ocean and take it easy.

Thursday night I did pass a clot, it looked funny but I didn’t think anything of it and went on to the beach since my doctor said it was OK and I was not cramping. Monday I called my doctor and my numbers went from 251 to 3,000 which was normal but meant I was five weeks but that once again I thought my dates were off. That night still at the beach I went to the showers and discovered I passed this big tissue looking thing. Again I thought I was fine and we were still optimistic. The next night was the heaviest of the bleeding but I was not cramping and I passed another funny looking clot.

On Monday, July 13 I had a appointment and the ultrasound showed I lost the babies apparently at 7 weeks when I was bleeding. I was heartbroken. My doctor ran a lot of test but says she thinks it was just bad luck and other than a thyroid condition I was fine. She gave me hope and said not to give up and that next time will probably be different and it’s a good sign that I have carried a baby to term. We can try again when my period starts back. I am supposed to stay on my prenatals and eat healthy like I have been doing but stop my progesterone until I get another positive test then start it again.

I am heartbroken and torn. I know it happened for a reason but I feel like I disappointed my family because they were so excited. My son is too young to understand so he talks about it but he doesn’t know how long a baby takes anyway. I did everything right and this happened. I want to continue to drink water, eat healthy and take prenatals but I am like whats the point? I want to try again but I find it very hard to move on. One thing that helps is my son and husband but this is hard, I cant find the strength to keep going. Thanks for letting share my story.