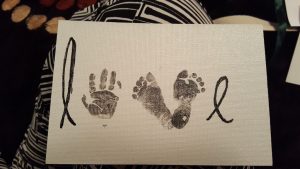 I’ve had a total of 3 pregnancies and 3 losses. My first loss was a miscarriage at 9 weeks on April 9, 2013. I had just found out I was pregnant and I figured that it happened because I had a heavy labor job and that put strain on my body.

We decide to try again and fell pregnant again in July 2013. To my surprise I was expecting twins. Everything seemed to be going well and on my 19th week ultrasound I found out I was expecting boys. Strangely that day I felt something was wrong but the doctor just seemed not to care that I had a strange feeling, he said it was just my nerves. That night I started having pains so I went to the emergency room only to be on hold for hours. By then I had started to dilate (I was aware of that) then I saw a strange liquid come out of me and my water had broke.

An emergency nurse checked the babies, they still had a heart beat. The doctor came in and when she inserted her finger in me, she finished popping both bags. My heart broke – I knew I was only 19 weeks and they wouldn’t survive. That night I went into labor at 4am and delivered my twins – I was just told things happen. I followed up 2 weeks later and the doctor just said the same: things like this happen all the time. I came to realize I had a short cervix and it needed to be stitched.

I grieved their loss for 3 years. I went into a depression, quit my job and shut down from the world until I tried again. In July 2016, I was expecting a baby girl. I was so excited and I just thought it can’t happen again, the doctor I was seeing was saying everything was OK, but no ultrasound was done until 20 weeks when I found out the gender. My cervix had opened andI was scheduled for an emergency cervical cerclage and send to a different doctor. They had to put a needle in my stomach through the bag to make sure there was no infection and theire wasn’t, so we proceeded.

I thought I should be okay from now on, we did everything we could, the worst thing that could happen is to have a preemie baby , but I was wrong. At 24 weeks and 4 days my world was crushed once again. The night before going to the doctor I felt strange but I thought it might just be regular symptoms. But I woke up in pain, contractions had started, so we headed to the ER where I got my cerclage. I thought I was delivering early, but when they did an ultrasound no heat beat was found, I had lost my baby over night and I didn’t know it.

They removed my stitch and a few hours later at 3:16 pm I delivered my daughter naturally. She was stillborn Dec 22, 2016. She passed away and I felt like I should have known. Guilt built up in me right away. I lost a lot of blood and my heart rate had raced up, the doctor suspected I had antiphospholipid (it’s a strange disorder that causes blood clots). I had mine in my lungs and they had developed around my baby’s placenta causing it to abrupt. It’s a rare condition but doctors don’t test for it until you have already lost 3 or more pregnancies. The only treatments for this is taking baby aspirin before getting pregnant, and while you’re pregnant, and in some cases after as well. Also it’s best to start blood thinner treatment before getting pregnant or seeing your doctor right away.

I’m not saying its going to be easy but it’s something else we can try to prevent another loss. I recommend that we get tested for this syndrome. I’m hoping when the time is right, I can try again and be happy and have a happy ending. I grieve my daughter everyday & I miss her. I don’t know if i could go through that again.