Today was my due date

Several weeks ago when starting the website for Through the Heart, I debated about how much of my personal story to tell. Ultimately I decided to keep the mention of my loss short and void of detail – after all, this organization isn’t about me, it’s about YOU.

During the last several weeks I’ve had the opportunity to speak with a lot of people about pregnancy loss and hear stories of heartbreak, courage, and hope. I have encouraged people to find an outlet for their emotions and, in particular, have noted that writing can be therapeutic. I’ve come to realize recently that I haven’t been taking my own advice.

It took my husband and I 10 months to conceive our first child. Once we did, we ran the gamut of emotions the same as any new parents-to-be: excitement, worry, panic, disbelief, and utter happiness. We had no reason to suspect there would be any problems but nonetheless were still tentative as most couples are.

In early December 2012, we went for what should have been a NT Scan. I had never had an ultrasound before but when the baby came up on the screen, I knew something was wrong. It resembled a bean and its body had no definition. The sonographer told us the baby was too small to complete the scan. We then went to speak with my ob/gyn who informed us that our baby had a cystic hygroma, which in basic terms is a build-up of fluid around the head, neck and spine. She told us that in most cases, the presence of a cystic hygroma indicates a chromosomal abnormality that is incompatible with life. This news was heartbreaking. We were in disbelief.

I had blood drawn for the MaterniT21 test which can detect trisomy 13, 18, or 21, which means the presence of 3 chromosomes instead of 2 in those pairings (trisomy 21, the most common, is also known as Down syndrome). It took 2 excruciatingly long weeks for the results to come in but when they did, we were relieved to hear that the test was negative for all 3 trisomies. We also found out that day that our baby was a girl!

We gained a lot of hope that day and although we knew there we still issues (the presence of the cystic hygroma, for one) we felt reassured that we would in fact be having a baby. Just before Christmas, we began announcing the pregnancy to family, friends, and co-workers.

After the initial diagnosis of the hygroma, I began seeing a maternal fetal medicine specialist as well. At my initial visit it was still early to tell what exactly was going on. When I revisited around 16 weeks, the doctor noted that he thought there might be an issue with her heart. He used the word might because at that point in time, her heart was about the size of a pea and still very difficult to see. It appeared, however, that one of the ventricles was either severely underdeveloped or missing all together.

It was decided that I would undergo an amniocentesis to draw amniotic fluid in order to test for additional chromosomal issues. When the results came back, we found out that there were 2 chromosomal defects – a deletion on one and an inversion on another. The defects were a fluke and not the results of our own genetic makeup.  This was, we were told, a very rare scenario. We then met with a geneticist and a pediatric cardiologist who confirmed that there would be major defects with our daughter’s organs and brain function and the possibility that she would not even survive past birth. The terrible news kept piling up.

The weeks surrounding this diagnosis are a blur. Through all of the meetings with doctors, all of the ultrasounds, all of the tests, the information that kept presenting itself to us was that our daughter would have an extremely low quality of life. We made the incredibly painful decision to terminate the pregnancy. In early February 2013, at 20 weeks, I underwent a dilation & evacuation in what were the 3 most agonizing days of my life.

Up until now, many people in our lives did not know about the termination – they assumed we miscarried. I kept that information private because in the moment, I did not want to deal with the judgment that can come along with such a decision. But now that time has passed, I don’t feel that I should have to keep it a secret. I am not ashamed of the decision I made. As parents it is our job to protect our child, and by keeping our daughter from a life of pain and suffering, we feel we have done that.

The last few months have been hard. We’re lucky to have family and friends who love and support us and we know that with time, things will get easier. The memory and the pain will never completely go away, but we will go on. 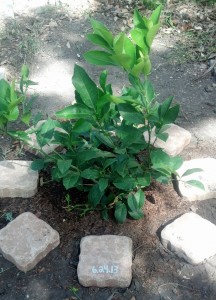 Today my husband and I planted a lemon tree in our backyard in memory of our daughter. This probably wasn’t the best idea for 2 reasons:

Still, it seemed like the right thing to do for us. As I stood there looking over the tree, I felt like I was going to throw up. The only thought going through my head was that I shouldn’t be planting a tree, I should be having a baby. I think in days ahead though I will be glad to have that tree and I hope it will be a source of comfort and peace.

I’ll be glad when today is over and we no longer have June 24 looming in front of us. I know things won’t magically change tomorrow but I do have faith that there are better days ahead and we will someday have a child.

Our baby girl is in our hearts today and forever.

Hello! I'm Karen Kelly, co-founder of Through the Heart. My journey started in 2013 when I lost my daughter at 20 weeks into my pregnancy. I experienced 2 more losses along the way and have used this blog as an outlet for a lot of random thoughts and emotions. I hope that you find it helpful. Feel free to reach out at kkelly@throughtheheart.org if I can help in any way!

Thank you for sharing your story. I know it is a decision that is not made lightly. Though the circumstances around my first pregnancy were different, I know how hard the first EDD and milestones can be. I hope this organization and posting can be therapeutic for you. Best wishes in your future TTC.

Thank you for sharing. I hope moving last this milestone brings you some relief.

Oh Karen, that’s awful… What a painful decision to have to make, and how terrible an experience it must have been. Sending you lots of love and prayers in this difficult time… It never goes away but someday you’ll have another sweet little one to take your mind off of it, and his/her big sister will be watching over, healthy and whole 🙂

You are an incredibly strong woman. Thank you for sharing your story with us.

I am so glad you shared your story and I hope that it proved to br therapeutic for you. Your little girl is so lucky to have parents who put her first.

Your story is heartbreaking, yet beautifully told. I, too, planted something for my baby: a peace lily that I repotted so I could bury my tiny fetus and placenta. I hope your lemon tree thrives in spite of the drought. Even if you decide not to take it with you, remember that most people like lemons in something, and that your special tree will be well looked after if you leave it planted.

Thank you for sharing your story. I am dreading October 5th and yet hoping it brings me closure. I hope you have found some peace. Much love to you and yours xo

A memorial tree dilemma | Through the Heart

[…] posted earlier about how my husband and I planted a memorial tree in our yard on our daughter’s due date. We […]