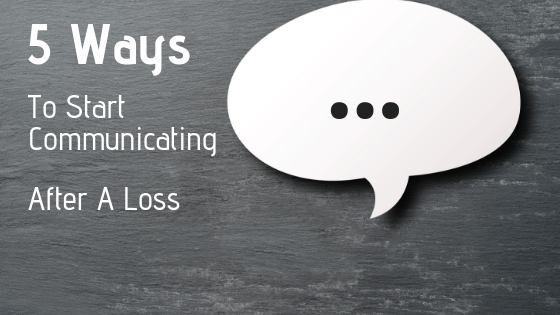 5 Ways to Start Communicating After A Loss

Ever talk to an animal and expect a response? Like the Zebra is going to say “Hey Chuck, thanks for being here. The reenactment of the Lion King scene is at 2, get there early it fills up quick”? This is the argument I have with my Mom whenever she signs to gorillas in ASL at any zoo we go to. However, there will always be a barrier between that animal and you, no matter how hard you try. Maybe, this is why after our first loss it was so hard for me to communicate with Sara, because it felt like there was this barrier that seemed insurmountable.

In reality, it was more because we were both underwater and we couldn’t truly understand each other, but we were saying the same thing. So how do you communicate after a loss? While not perfect here are some things that worked for us.

Counseling: It really helped to be in a setting where we could work on the mechanics of our communication. While yes getting the emotions out is important, getting the top off the jar, really changes the function of the jar. Try to find one that specializes in grief, or even in interpersonal communication.

Find thunder buddies: Find a couple or a group who has gone through a similar loss and feel comfortable speaking about. It was so helpful to come together to speak to another couple in a group dynamic and more one on one. Then come back as a couple and debrief. Often times Sara and I would share easier when we could phrase similar feelings expressed by our friends.

Non-verbal: Rub shoulders, hug tighter, hold hands, or even use facial expressions to communicate. I have a really hard time shutting up so this is tough for me. After our first loss, sometimes Sara didn’t want to talk. Rubbing her shoulders or hugging her tighter allowed me to feel if her back had knots which means stress and this information helped me create a less stressful environment.

Laugh: Watch stupid movies, go to a comedy club, go to a concert, and just laugh. While you may feel guilty those moments during a tough time will allow much-needed levity.

Acknowledge and reaffirm roles in the loss: It is so easy to want to point fingers, to feel guilt and shame. However, it is essential to talk about the roles in the loss. Start by speaking to your doctor as a couple. Get the facts. Then try to talk about your role in that fact, not your role in that feeling. This doesn’t assign blame but instead gives an opportunity to grow together out of the swamp.

Finally, one more, which technically makes this 6… don’t forget to say “ I love you” because truly, in the end, you can hear that and feel that from miles and miles away and no matter how deep underwater you might feel.