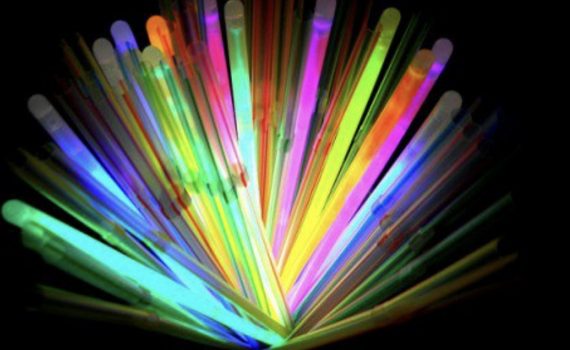 I saw a post on Facebook this week. One of those ones that someone wrote and it got shared a bunch of times, you see like fifty of them per day. About a random act of kindness that someone witnessed, some kind of clever life hack, or someone finding bugs in their food. But this one really struck me.

It talked about the writer being in a Dollar Tree store where she saw two children with their mother. One was an older child and one was a toddler. The older child had a pack of glowsticks, and the mother gave one of them to the toddler to stop him from crying as he grew impatient with the long checkout line. The baby had calmed down, when the older child reached down and took the glowstick, broke it, and handed it back to his sibling. The baby was amazed that it was now glowing, and the sibling said something to the effect of “I had to break it so you could get the full effect.”

The author then went on to say that the baby was happy with the glowstick before, just existing. Because  he didn’t know or understand what it was created to do, which was to glow. And that in that moment, she realized how similar the situation is to so many of our lives. We start out unbroken, we live our lives. The some day, something happens. Something so devastating that it shatters us, it crushes our hopes and our dreams, it leaves us feeling like nothing more than an empty shell.  It breaks us. And, much like the glowstick, only after we are broken, are we able to realize our purpose. The sole reason in which we were created. That is when we find our glow.

It is said that God has a plan for us long before we are born. Some people’s plan, unfortunately, includes heartbreak and pain beyond anything they could ever imagine. Some people let that pain break them. But I believe the vast majority do the opposite. They take their pain, and they use it to make a difference for someone else. They turn the hurt and the sadness they have felt and transform it into something positive. The sun shining through the storm clouds. The brightness and the light emerging from the cracks.

I’ve seen it said so many times, that when you lose a child your life gets split into two categories:  BEFORE and AFTER. Before my daughter, I believe that I was a good person. I have always tried to be kind, and be generous when I was able. I was considerate of the feelings of others. I wasn’t boastful or unappreciative. After my daughter, I have become a much better version of who I once was. I am kind because I understand what it’s like to feel empty, and to have the kind words of others be what gets you through the day. I am generous because I have personally experienced the generosity of others when I needed it most, and I want nothing more than pass along that feeling to someone who is in the midst of the worst days of their lives.

I am not unappreciative because I understand how precious life is and how quickly it can be take away. I savor every moment that I spend with my children. I give them extra hugs and kisses when they ask, and sometimes even when they don’t ask. I never miss a chance to tell them how special they are, how important they are, how loved they are. I know that simple things like having healthy babies, which so many people take for granted, is just not a reality for SO many people. The darkest day of my entire life has put me directly on the path to be the light for others, on their darkest day.

And now, today, it all seems so clear to me. My plan, or at least a small part of it. I am here to be the light. I experienced loss so that I can offer support to people around me who are experiencing it. Not because I’ve healed, but because I am still heartbroken. And that heartbreak fuels a need to ease the aching hearts of others. A need that never would’ve existed had I not been broken myself.

Because we have been broken, now we glow.

“Tell the story about the mountain you climbed. Your words could become a page in someone else’s survival guide.”

Thank you Heather, for Sharing this lovely message.