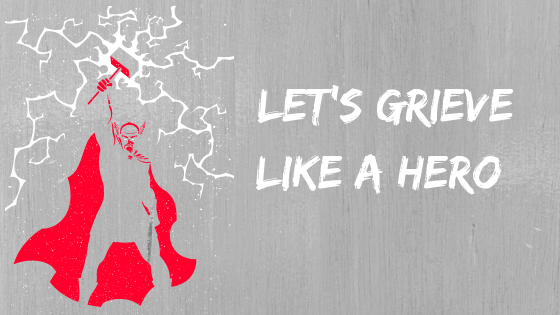 The last place you thought you’d get a mild Endgame spoiler would be a blog on experiencing pregnancy and infant loss, but yes I’m going to write something spoilerish, so if you want to and haven’t seen Endgame yet, go see it and then come back and read this…

Grief for men in mainstream film is rarely depicted accurately. If you’re a dude in a blockbuster movie, grief makes you do two things: Channel all of it into anger and revenge, or channel it into revenge and anger. If you go by the summer blockbuster, your grief is gone the moment you exact revenge. In real life we don’t get that luxury especially when you can’t wage war across universes when it comes to your grief over a pregnancy loss…I mean who is there to even fight?

That is why when I saw Avengers Endgame the other day I was shocked by Thor (no pun intended). In Endgame we see the Thunder God lash out to seek revenge for his grief and frankly gets it, about 10 minutes into the film, but it doesn’t fix anything, it doesn’t fix his grief.

In the following scenes, you see how much it actually impacts him. He isolates himself, he drinks a “God”ly (pun intended) amount, he’s letting his anger seethe out in weird ways, and most importantly he’s low, he’s real low.

I immediately related, and not just because I had a Thor-like body all of a sudden but because I saw my own grief on that screen. I felt what it was like to talk to family and friends, ashamed and anxious. I felt that self doubt that I would ever be “myself” again.

It was real grief on the screen…it was grief that doesn’t just go away with one single act of revenge. It depicts the journey that grief is. In three hours you see Thor’s anxieties and insecurities, you see him run, you see him hide, you see him open up his heart, and watch as he lets some of that go.

One moment hit me hard in particular as Thor stands upright, for what feels like the first time in the movie, outstretches his hand and waits. What he summons isn’t just an old friend but something that defines him as a person, something that tells him he is worthy, and it comes to him.

I really urge you to find a way to see that, even if when you hold out your hand you don’t receive what you lost, you may find something else, some power to continue on that hero path you are on.

Paul, I’m sorry for your pain and your losses. Heartfelt read❤