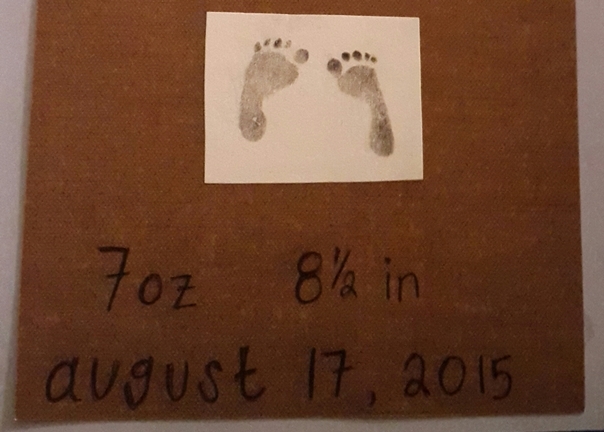 Ever since I was little all I could think about was getting older and having children of my own. All I have ever dreamed of is being able to someday be a mother. When I turned 18, in 2010, I started a new relationship. I was so caught up in the new relationship and all I could think about was having a baby. My boyfriend at the time and I weren’t doing anything to prevent pregnancy. To my amazement I got pregnant that same month, in 2011. I was so excited and couldn’t wait.

At 8 weeks I went to the doctor for an appointment. They did an ultrasound and told me that the sac was not measuring at 8 weeks. It was measuring at 5 weeks. They just told me maybe I was off on my dates, but I knew I wasn’t. I didn’t know what to think, but I made an appointment the next week. The sac was still measuring the same. They told me that I was going to have a miscarriage and I had options. I decided to let the sac come out naturally. So a couple weeks later I had my miscarriage and everything passed naturally. I was devastated and I didn’t know what to think. I was young and healthy, why did this happen to me? Now looking back it was probably a good thing I didn’t have that child. Although it was a terrible thing to go through, my boyfriend, at the time, and I weren’t in a good relationship. We ended up breaking up.

A while after I met an amazing man and we began dating. He was older and has 2 children of his own, but that didn’t stop me from falling in love. We soon became pregnant and we were both so excited. This time I told my family and they were all excited. Unfortunately the same situation happened. I went in for my appointment and I was measuring at 6 weeks this time. Already having gone through this I knew exactly what this meant. This time the doctor gave me medicine to quicken the process and medicine for the pain. A couple weeks later I had my 2nd miscarriage. This time I decided to wait. I went on birth control and we soon got married. After being married for a year I wanted to try again. I was in love and happy and wanted to expand our family.

In January of 2015 I went off birth control. We decided to just let it happen naturally. All I did was track my period to get an idea of when I may ovulate. I got pregnant shortly after in May. I was so excited, I couldn’t wait to have a baby. I was so terrified though already have gone through 2 miscarriages. I made my appointment at 8 weeks and was so nervous. I went in and was so surprised when I saw my little Gummy Bear right away. I saw him on the monitor and was able to see his heart beating. I couldn’t believe it I was so excited. I talked about it non stop for the next several months. Everything was going great. I went in for another appointment at 11 weeks and was amazed to see how much he had grown in just 3 weeks. I had spotting the next week at 12 weeks and went in and everything looked great. A couple weeks passed by and I had my 15 week appointment. We listened to his heartbeat and everything seemed perfect.

I scheduled my next appointment, the anatomy scan, for August 31. I was so excited to find out what we would be having. My husband and I both wanted a boy, but of course would be happy with a healthy little baby. Just after 17 weeks on August 15 I started to get pains. I just figured it was growing pains and went to sleep. The next day on the 16th they were still going on the whole day. I only had spotting when I wiped twice so I figured there was nothing to worry about. The same night though I kept feeling the pains and it seemed like they were closer together. I called the on call nurse and she told me I should be fine. She told me to call the next day and see if I could have an appointment. So I tried to get as much sleep as I could.

The next day, on Monday, August 17, I called the doctor’s office. Luckily they were able to see me right away. I went in and was waiting a while since they squeezed me in. I was nervous and just hoped they could give me an answer. Finally I went back to see the doctor. They first did an ultrasound and my baby looked just fine. His heart was beating and he was alive. I was excited but noticed that he was face down and was really low. The doctor decided to check my cervix and told me I was 3-4 cm dilated. I couldn’t believe it. I was in shock and I didn’t know what to think. How could I be dilated so much when I was only 17 weeks?

The doctor sent me to the hospital right away. I got checked in to the hospital immediately. The nurse came in and drew some blood. The doctor came in and talked to me briefly. They wanted to do an anatomy scan to make sure the baby was okay before they tried to do anything. I had to wait a couple hours before they could perform the scan. Within the next hour the pain, which I now know were contractions, started getting worse and closer together. We called in the nurse and she gave me something to help with the pain. The doctor came in to see me and did a quick ultrasound on a portable machine. Again my baby looked great. His heart was beating.

The doctor soon discovered that my amniotic sac was now outside of the uterus. There was absolutely nothing they could do. He told me that I was going to be delivering my baby and since the baby was only 17 weeks they wouldn’t be able to do anything. Soon after the doctor left the pains were a lot more painful and closer together. Before I knew it my water had broken. Then with the feeling to push I delivered my little baby boy. My healthy little baby boy. We got to hold him and the hospital took pictures and gave us footprints. We named him Spencer Bruce and he was the most beautiful thing I have ever seen. The worse part was knowing he was alive and there was nothing I could do to save him. I was in complete shock. It wasn’t real, I couldn’t believe it. Leaving the hospital empty handed was when it really settled in that I no longer had my baby.

I am still in the grieving process and I am not really sure what happens from here. The hospital is going to run tests on our baby and will hopefully have answers. We will do tests on me and see if we can have answers from that. I am completely devastated. My husband and I have hope and will try again. We will do everything we can to help this from happening again.