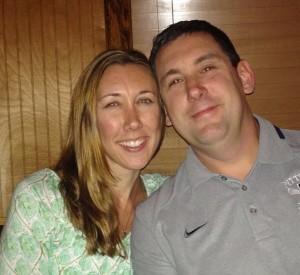 I am very grateful to have found this forum, as I have felt an overwhelming drive to share my story and have felt that most of my family and friends are not open to hearing my story. I am a therapist, an emotional person and a sharer, so not being able to share as much as I need to has been challenging.

I guess my miscarriage story starts when I found out I was pregnant. I am 36 years old and have waited a very long time to find the man that I wanted to be the father of my children. I have wanted children as long as I can remember and have built my career around babies and children. So, I was shocked and beyond excited when after only 1 month of trying, we found out we were pregnant. My doctor had warned me that it may take some time to get pregnant and I have had many friends who have struggled with this, so assumed that we would have a longer road ahead of us.

When I found out I was pregnant, all those dreams I had been holding onto for so long just fell into place in my mind. I began picking out names, planning the nursery, planning the birth, etc. We had our first ultrasound at 8 weeks and it was the most amazing thing to see my little baby and to hear the strong heartbeat.

I am a yoga instructor and during one class on a Tuesday night, those dreams began to be ripped away. I felt a gush of blood between teaching 2 classes, but was told that some bleeding during first trimester was normal. So, I was trying to balance utter panic with rational thought.

Once I got home, I called the after hours number of my OB and they encouraged me not to worry and scheduled me for the following day.

The next day I was seen by my OB who could not find a heartbeat, but still encouraged me not to panic and scheduled me for an ultrasound 3 hours later. I went home, actually feeling somewhat confident that things were going to be okay. At the ultrasound, the tech confirmed that she could not hear the heartbeat and I was so confused, I asked her what that meant. She stated that I had lost the baby and I was devastated.

The next 4 weeks were an utter nightmare, both physically and emotionally. My doctor gave me the options of how to “complete the miscarriage” and I chose to take the medication. I was terrified. I had a lot of bleeding and cramping, but the medication did not work. So, the following week, I had to take another dose. That one worked. I had so much cramping through the night and could barely sleep. At 5am, I passed the baby and per the request of my doctor, I had to pull my baby out of the toilet and put in a Ziploc. The whole experience was awful and I will never forget the feeling of my baby coming out.

I continued to bleed and have pain for another week and then went in for another ultrasound and found out that not all of the “fetal matter” had passed. Given that it had been 3 weeks at that point, I also developed a terrible infection. Therefore, I needed to get a D&C, which is something I had wanted to avoid from the beginning.

The D&C was the worst part of it all. Given that there was only a small amount left, I had the procedure in the office, with very little medication. Given my terrible infection, it was the worst pain I have ever felt. I generally try to be “tough” and often minimize my pain, but this was one time I could not hide how much pain I was in.

Following the D&C I was in pain for about 5 more days and bled for about 9 more days. Through this process, I had so many questions that I could not find or get answers to and this created so much anxiety. I felt like my body was not mine and was exhausted with the bleeding and pain. I was not sure if this all was “normal” and was scared.

This is the first week that I feel physically back to normal and now I can feel the emotional loss setting in. The physical ordeal was so traumatic for me, I was not able to find space to deal with the emotional piece of my miscarriage. So, now I committed to giving myself that space to grieve and mourn and that includes using this site.

It is amazing how much my heart opened to this baby in just 10 short weeks.

Thank you all for letting me share my story.